It's safe to say 2017 hasn't been America’s finest hour. In this extremely divisive environment we need heroes to step up in the face of adversity and thwart evil everywhere we can get it. On Friday night with a healing community, a struggling team and all good American’s hopes riding on his powerful right arm Justin Verlander became a hero. Almost a week before his memorable start that night Verlander had turned in the best start of the entire 2017 Postseason striking out 13 Yankees over 9 innings while limiting them to one run on 124 pitches. But that was before the stakes and more importantly the narrative had changed going into the 6th game of the American League Championship Series. The villainous New York Yankees had been able to take advantage of some incredible pitching performances to lead the best team in the league three games to two.

In a time where the rich seem to get richer, The dastardly Yankees’ evil dynasty 2.0 plans seemed to be falling into place more quickly and perfectly than even the most optimistic within the organization could've imagined. With a stacked farm system ready to supplement the talented young core that has taken leaps forward it was only a matter of time until a new reign of evil empire championship banners flew in the Bronx. With that young core struggling through the first two games, somehow the Yankees starting rotation that was seldom mentioned coming into the series was shutting down a Houston offense that was historically good throughout the regular season. “Somehow”? We all know it was Yankees devil magic. Magic that has unjustly favored one of the already richest franchises in the world and allowed them to torment generations of impressionable young fans for years. Since 1992 the Yankees have not faced any hardship, in that time they haven't placed lower than 3rd in the toughest division in baseball. It may seem harsh to attack the ironically patrioticly named organization after they were just eliminated however, fivethirtyeight established scientifically they're awful and nobody likes them. The Yankees prepare to take the field before ALCS game 6

I am now sorry to admit I was one of many people who thought Verlander was done a few of years ago. After 6 consecutive All Star appearances his strikeout rate took a big hit in 2014 and he seemed to be succumbing to his workload and natural age decline. In 2016 though he put up a Cy Young worthy season almost out of nowhere, some even believe he was robbed of the award(). Since then he has been a consistently solid to great pitcher, particular after waiving his no trade clause to go from the only team he’d ever known to a playoff bound one in hopes he would get attain the October glory that thus far has been denied to him.

Todd Frazier gets paid to hit balls with a bat, Verlander made him look like this

With that context I think we need to give a little more appreciation to the performance American hero Justin Verlander gave his country. While Friday’s game may not have been the deciding one it was equally as important. The pitching staff was coming off some rough outings and this team, assembled by some of baseballs brightest minds, was in unfamiliar territory. Knowing there was a short leash and little reliable back up Verlander was unrelenting. He was pumping 95+ mph fastballs even through his final inning of work. In that final inning, the 7th, got a little scary when the Yankees got their first two runners on and we all began to get that pit in our stomachs. We knew how this played out and what was about to happen, they were gonna beat Verlander. Evil would win as was so often the case involving this team throughout our traumatic formative baseball childhoods. They would push the runs they needed across home plate and break the last hope the Astros had left and the Yankees would squeak by a better team en route to an inevitable 28th championship. Only that's not what happened. It was Houston who got a favorable call when Verlander avoided a walk that would’ve loaded the bases with no outs. He then got three quick outs, though one was a heart stopper, and the Astros’ prolific offense separated the score even more in the bottom of the same inning. With the highest of expectations he gave what will be a defining game of a possible Hall of Fame career. If nothing else continues to go right in this country at least we’ll all know this, the New York Yankees will not be champs in 2017. Between egomaniacal world leaders and Mother Nature we may not even make it to 2018 but Justin Verlander gave us all a little peace of mind for our last moments. Like Aragorn leading the last free men into the black gate Justin fearlessly faced down forces of Steinbrenner and emerged victorious. 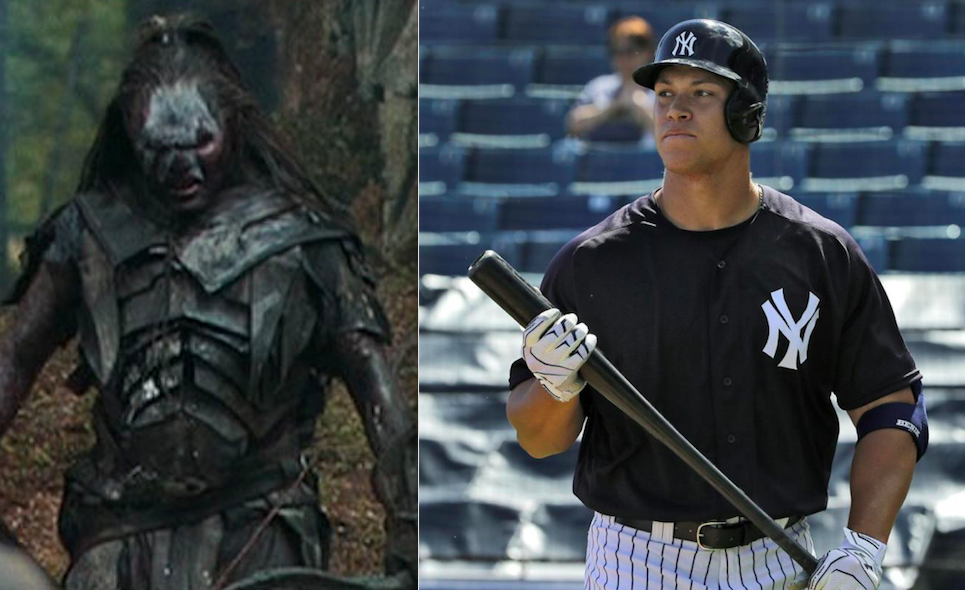 There are a bummers almost everywhere you turn these days but my new hero Justin Verlander made the world suck a little less last Friday night. For his heroic efforts he gets to face the team that has been considered the best team ever but if anyone will be able to rise to the challenge it will be him. Before we get to that though on behalf of myself, America, and the world I would just like to say thank you Justin Verlander.

P.S. Me and Jose Altuve finally have something in common.