You may be asking yourself, “Isn’t February a little late for a best of list?” You’re right it is. Like seemingly everyone else, this January has felt like a year on its own and everytime I made time to write this something came up. Through all odds here it is barely in time to still be excusable. I did get through all of my backlog this year, so even though I did not get this post up in the time I wanted to I am the most prepared than I have been in the last three years to write this.

This is another year I decided to only write about one album and I’d be lying if it wasn’t partly so I can get this out sooner. However, this album did also stand out more than any for me of the year and not only because of the lofty expectations that were laid before it. Tool fans, some of the most die hard in all of music, waited 13 years from the band’s last release 10,000 Days to get any new music. THIRTEEN! Somehow, against all odds and unrealistic hype a wait of that magnitude can build we were not disappointed. We should have known better than to doubt our Nu-Metal overlords. Fear Inoculum delivers on the cerebral and complex metal sound that has come to define the band. 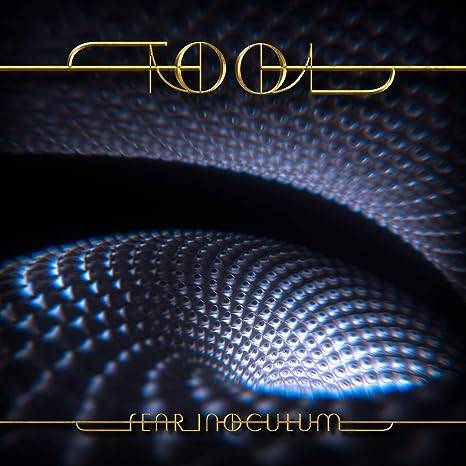 The complexities of time signatures and sounds the band used for Fear Inoculum blend together in exciting and new ways that more than deliver on their promise of the record being “done when it is ready”. If you’re not already aware Tool is not really for “casual” listening as most of their songs are over 10 minutes long. Fear Inoculum’s self titled opening track is a prime example. From the mystique of the opening drumming through the15 minutes of asynchronistic jamming that follows they capture your attention and refuse to let go. Any fan of Tool’s will be drawn in by the familiar guitar tones but added to differentiate this collection of music is more diverse percussion work, particularly with the amount of tom sounds and different types of drums used. As we’ve seen from the band before every member gets to shine throughout the various jam breaks that comprise the majority of their music. Maynard’s unique and powerful vocals once again tie together the threads of these incredible musicians, elevating them to the levels they constantly achieve. He has an ability to be a presence in their music with hushed and short deliveries or through overpowering and being the main driver. Legion Inoculant and Culling Voices being examples of the former and the Grammy award winning 7empest one of the latter. 7empest also serves as an example that if they wanted to they are still capable of writing songs that could dominate the airwaves. Obviously it would have to be the shortened radio edit but there is no way those heavy trashing guitars and Maynard’s aggressive vocals wouldn’t squeeze out the lifeless and disguised pop imitations atop the rock charts these days

This latest album joined with their catalog is evidence they will likely never stop experimenting and why should they when they’ve yet to have a failed one. Tool is a band who famously wrote a song after the Fibonacci sequence, they take the time to plan out things they know their fans will dissect and appreciate. As with every release they’ve had, Tool’s dedication to their craft rings through Fear Inoculum like their thunderous guitar riffs. Already fans have been digging in and dedicating hours to examining the first Rock album to top the Billboard 200 chart in over a year, dethroning America’s Sweetheart in the process. Hopefully, this time it is less than THIRTEEN years before we have to wait for more.

Having fallen in love with the king of bros over the last year, hearing this song made this man bunned, jeans with flip flop wearing dude want to become king of the dudes. Sunflower Bean’s groovy style has quickly made me a big fan, this is one of only two singles to crack into my favorite songs this year but I love it.

The pleasant little congo intro is just the start of this funky electro tune that you’d have to be dead to not want to move yourself to.

Even my contrarian self couldn't resist Lizzo in her coming out year. Juice was my personal preference of her many hits.

In looking back at my library I added more songs from When I Get Home than A Seat at the Table. This song might as well have been written for me; the lo-fi effects, chill beat, talented soulful voice driving it. I used this song as my chill out track in a lot of playlists this year and this one is no different

This was my pop tune this year. I imagine a lot of people enjoyed the sight of me belting this out in the car.

It's hard to believe this song came out this year much less all the way into May. Maybe it’s because I really enjoy Rhye or just the particular haunting tone he struck on this tune that makes me feel like I’ve been listening to it for years. Maybe it’s just myself foreboding I will be for years to come.

It’s been a while since I was moved by a song. The duet features beautiful harmonies, deeply personal lyrics and a genuine authenticity few can accomplish.

Even before I recognized Blaqk Audio’s lead singer's voice I was entranced by this song. Like the previous two, the only way I can describe my relationship to these songs is being haunted by them. But in a good way I guess

I’m from El Paso, I’ll be damned if I leave one of the city’s most famous sons off my end of year list. I feel like Khalid didn’t quite get the play he deserved this time around. For me American Teen had to grow on me the same way Free Spirit did but I don’t feel people had the patience for it.

10 Gettin’ Outta the City - The Polish Ambassador and Nitty Scotty

The only other track I’ve really heard from Nitty is this and it bangs just as much. Am I too old to say bangs? Probably, but this song for sure bangs there really isn't anything else that needs to be said for it.

There’s not much purely joyful things around anymore so I feel like we should appreciate them when we get them. I think this song from Tacocat is just a joy, it’s impossible to sing it without a smile on your face.

Ex Hex added to the bands that made me happy that Imagine Dragons has yet to succeed in their goal in murdering rock music. The group’s sound screams of Heart and along with bands like Sheer Mag are evidence to the cliche rock will never die, unless Imagine Dragons gets their way that is.

There are songs that for some reason inspire a feeling of being bulletproof in us. Hard to Kill is one of those songs. Listening to this in the car is likely to result in a ticket of some sort.

All that from Hard to Kill^ applies here too, except in German.

I don’t have any real in depth reasoning or funny line for this one. Maggie Rogers had a great record and this was my favorite track off of it.

With 2019 being the last year of the Skywalker saga, for better or for worse, I included my favorite song from The Rise of Skywalker A New Home. The song title practically being A New Hope can’t be a coincidence. It is wild to me that John Williams did all this, this whole time, and never missed a beat. For me, A New Home’s themes will end up as iconic as almost any in the series.