Every week I’ll usually tell you my thoughts on a new release, sometimes more than one. This week was probably my most anticipated album of the year. That being said I wouldn’t chance our thoughts on it coming from me, some dude on the internet. I decided to step aside and let Liz, our resident Fandroid, discuss the greatest performer of our generation, our Q.U.E.E.N., the writer of the best song ever written[1] Janelle Monae.

Janelle Monáe has released Dirty Computer, her third studio album and it comes 5 years after the release of The Electric Lady, but this time it veers away from the Cindi Mayweather storyline we've been following. To say this is a beautiful ad sensory experience would be an understatement; it is that and so much more. Monáe has described this new music as an introduction to her real self that has been underneath her android alter ego and that she’s been wanting to make this album for years now. She revealed to Rolling Stone that she is in fact queer and this album is definitely a celebration of that. It is personal, spectacular, cinematic, exploratory, electronic, funky, melodic, a throwback, the future. It is everything. Oh and to top it off it is unapologetically political and while the story is set in the future you can draw the parallels. The sounds of this ‘emotion picture’ highlight how much of a sci-fi nerd she has always been and the content of the music makes the case that she is operating on another level in a separate art dimension than which we inhabit.

I want to get to the tracks of the album, but the lead up to this release has to be praised. We were teased with a trailer and four music videos[2] and the most amazing tracklist reveal I had ever seen. When you visited Janelle Monáe’s website and typed in the code “I AM A DIRTY COMPUTER” you gained access to the tracks and a description or inspiration behind each one. I was floored to see the title track featured Brian Wilson. Yes, THAT Brian Wilson[3]. 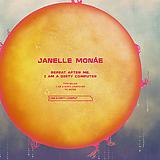 When it comes to the emotion picture we are immersed in this sci-fi short, where Jane is living in a future where anyone who is disruptive or different is labeled a “dirty computer” and its only a matter of time before you undergo the “Nevermind” procedure if you are. We find Jane about to have her memories forcibly deleted by The House of the New Dawn, but the ‘torch’ who is there to guide her is Zen, who Jane recognizes, but Zen has no recollection of their relationship.

Dirty Computer isn't prominently featured in the film, but the score we hear is taken from that song. Brian Wilson brings the tranquil harmonies and the tone is set for what kind of concept we're getting into. Crazy Classic Life is really the lead off hit and this is pop. It has fun lyrics and is also the first memory in the emotion picture that shows Jane’s carefree personality and we get a good idea of who she is with her friends. I don't know how everyone else will feel about Take a Byte, but it is one of my personal favorites. It works best with the visual, but all in all this is a cool and funky tune to chill to. This part of the film depicts Jane undergoing the cleaning procedure and although we've seen the sterile look of the New Dawn facilities, the color and neon we physically view is how I would describe the feel of this song.

In Screwed we see another memory showing the dirty computers running away from drones. Partly inspired by Gloria Steinem’s quote “I’m just tired of being screwed and being screwed by friends” and also by “the dismal morning of November 9, 2016”, the upbeat sound and contrasting lyrics makes this such a standout track. I also couldn’t help but compare the sound a little to TLC’s What About Your Friends and I was jamming to this even while having an existential crisis about the end of the world.Django Jane is one of the best rap songs I’ve ever heard and if you take a look at this previous article you'll also see how Make Me Feel captures Prince's essence.

Janelle's work with Grimes on Pynk is a far cry from their previous and equally brilliant collaboration together, Venus Fly. Steven Tyler even has a writing credit on this song and when you listen to it you do notice the association with Aerosmith's own Pink, except we do get more of a contrast within the song when the chorus kicks in. I Got the Juice was briefly heard at the beginning of the film, but it features Pharrell Williams and it doesn't disappoint. It also keeps the feminist and sexually liberated theme of the album going as does I Like That.

Don't Judge Me catches that 90's R&B sound, but Janelle's singing and annunciation in general invent a whole futuristic sound which she has proven to do so well. Her willingness to experiment with different sounds comes through on tracks like So Afraid.

The closing track Americans just needs to be everywhere already. I want to see it in the end credits of films, Pepsi commercials and I want people dancing in the street to it! This is definitely our own patriotic AF version of Let's Go Crazy and the closer for the emotion picture that lends hope, pride and the will to live free.

What's so amazing about this album is that I think everyone will find a track to relate to because of its diverse sound. I knew this would not disappoint, but it goes so far above and beyond any expectations I had and it was a true pleasure to experience.