For Round 1 of the Holiday Movie Tournament we'll be focusing on two questions.

Question 1: Why is this movie a good movie?

Question 2: Why is this movie better than the one it's up against?

Keep these two questions in mind as you read the arguments set forth by our two contestants and please remember to vote at the end.

There’s nothing more Christmas-y in this world than a “perfect” family Christmas going wrong. The biggest issue with most Holiday movies in existence is that they paint the holidays as a time when nothing can go wrong, whether it be re-encountering the “perfect” woman years later with only a glove as a form of tracking them down (Serendipity) or the whole street coming together to throw a last minute awesome christmas(Christmas with the Kranks) you’re hardpressed to find any semblance of reality in Christmas movies. National Lampoon’s Christmas Vacation gives us a real family christmas almost better than any other movie. Chevy Chase is at his utmost peak playing the bumbling but kind hearted Clark Griswold who is trying to have a perfect family Christmas for his whole clan but keeps running into issues along the way from dealing with a huge extended family taking over his house to his boss not really giving him the bonus he was planning on receiving. I guarantee there’s at least one scene in the whole movie that will resonate with your family, for me it was the scene where a seemingly perfect turkey is placed in the middle of the table and when it’s cut it implodes and reveals a husked out dry mess of a bird. Christmas Vacation shows us that all families go through problems during the holidays and that things never go according to plan but even in the midst of all that there is still happiness and joy. That’s what Christmas is all about, embracing the hecticness and the weirdness of your family and realizing that years from now we’ll look back fondly on how crazy Christmas was. Also the intro song belongs in any and all Christmas song playlists.

The strongest characteristics of Christmas titles are recurring themes: the value of family, the importance of charity and helping others, and the heartwarming goodness of fellowship among men. Regardless of what happens during the narrative of seminal holiday films, those are the driving take-aways that establish them as "Christmas movies". I don't know about you, but that shouts John McClane to me! In Die Hard, John McClane (Bruce Willis, duh) is only in Los Angeles because he wants to visit his estranged wife and kids at Christmas, in hopes of making amends. His plans are derailed by a terrorist plot in his wife’s office, and before he has any chance of fixing his family situation, he has to lay down some out-of-jurisdictional justice. It doesn’t get better than this. Family values? Check! Importance of helping others? Check! Heartwarming goodness? Check! All aspects of what you need for some Christmas goodness is covered. And in addition, we get some amazing action sequences, great performances by Bruce Willis and the late Alan RIckman, and possibly the best one liner of all time, “Yippee-ki-yay motherfucker”. That is gold! Now, don’t get me wrong, your typical “Christmas movie” is wonderful and all, but there is something special about Die Hard that you can’t get with your run of the mill type holiday films. So if you want to get in the true holiday spirit, take off your shoes and your socks, and make fists with your toes and pop this classic on! 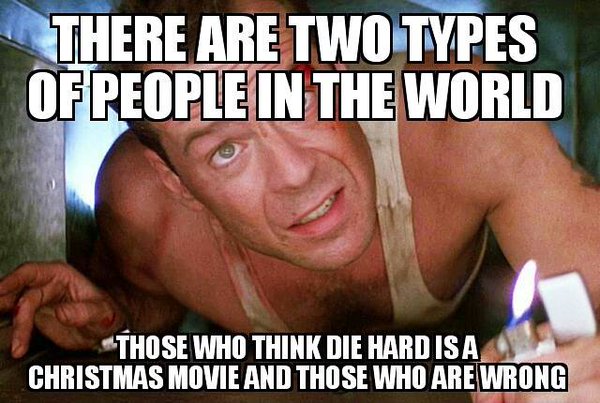 Here’s the thing about Christmas movies, they’re about Christmas. They’re not “Christmas adjacent” or just so happen to take place during Christmas, Christmas is almost a CENTRAL character to the thing. The biggest overall looming spectre of any great Christmas movie is the day itself that just doesn’t happen during Die Hard. Here’s what I mean, remember the great christmas classic Batman Returns? What about the yuletide tale of Iron Man 3? They were both set during Christmas but neither of them are really ABOUT Christmas are they, I mean I bet you didn’t even remember that DeVito’s penguin was chucked down a sewer on Christmas. Yet none of these is a Christmas movie, why then would Die Hard be?

Look Die Hard is a good movie, but it’s not a Christmas movie and saying it is makes whoever is saying that look just as bad as a person who’s singing christmas songs in July. Tough guys have the whole year to exist and shoot up the place, you can really only eat those big ol’ tins of popcorn at one point of the year, and that’s exactly what Christmas Vacation is. It’s a totally enjoyable and pleasant joy of life that exists FOR Christmas and in Christmas alone and that’s what makes it a great Christmas movie. Were this Tournament “What is the Best Action movie?” Die Hard would beat Christmas Vacation. Were this a “What is the Best Action Movie that just so happens to take place during Christmas?” tournament it again would beat Christmas Vacation, but this Tournament is about the best Christmas movie and Chevy Chase in a cardigan, with eggnog in his hand donning a santa hat is way more Christmasy than Bruce Willis hiding his hairline behind a santa hat coudl ever hope to be.

From beginning to end, Die Hard captures the Christmas spirit, whether by McClane’s Santa-hatted message about his possession of a machine gun to the closing credits set to “Let It Snow.” It wouldn’t endure every December were it not a legitimate Christmas film. Many will argue that Die Hard is only an action film that just so happens to take place during Christmas time. I, however, feel like this isn’t one of its drawbacks, but one of it’s greatest assets. Not only are you able to watch this film year round, but during the holidays specifically, serves as a nice change of pace from the common christmas flick, like National Lampoon’s Christmas Vacation. I am not by any means saying Christmas Vacation is a bad film, I just think Die Hard is the more entertaining of the two. It has the ultimate grinch in Hans Gruber paired with the ultimate badass hero in John McClane. It must be mentioned that this film not only propelled Bruce Willis’ career forward, but this film is also responsible for making Alan Rickman popular in America. I’ll take Bruce Willis over Chevy Chase any day of the week. You can’t stop watching once you start, and can’t change the channel if you happen to come across it on accident. Christmas Vacation doesn’t have that same appeal. Plus it could possibly be the most quotable film of all time. Cmon, you know you want to come out to the coast, get together and have a few laughs. See!