...seriously though, it's the second.

Every month(?) the contributors to The Irrelevant will share the one thing we've been into this week. It can be a movie, a book, a song, an album, some youtube video, a random meme, or twitter user, anything that's been taking up more space in our mind than it should. We want to share this with you because we like sharing things we're into.

I was pretty late to the party on Chris Gethard but since discovering him I have enjoyed everything he has done, particularly his new book Lose Well. You might know his face from The Office as Dwight’s assassin friend or Broad City as Ilana’s boss. In addition to acting, he is also a comedian who got his start doing improv. What initially drew me to him was how off the wall his self-titled late night show was but what made me a lifelong fan was his depth. He is a prominent voice on mental health issues and his HBO special, Career Suicide, has positively impacted countless people.

Lose Well is a self help book for losers and its main message is to how embrace of failure. You’ve heard countless quotes about failure but when it’s coming from people like Jordan and Jobs sometimes it’s hard to be optimistic and not to roll your eyes. In this book our boy Geth, a nerdy looking self appointed loser, shares his philosophies on life using personal and professional anecdotes. His knack for storytelling has a way of making the lessons feel real and impactful. Through his endeavours you are encouraged that through sheer hustle it is possible to will what you want created into existence.

I normally read physical books but for Lose Well Gethard opted to narrate the audiobook so I decided I had to listen to this one and it did not disappoint. It is only around 9 hours and plays more like a comedy show than a book so if you’re anything like me you might start it over again almost immediately. 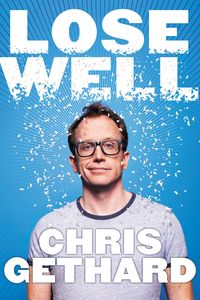 I get to see The Struts perform tonight and have been gearing up for this show all week! They have been opening for The Who, The Rolling Stones and the Foo Fighters for well over a year now and in that time they recorded their second album, Young and Dangerous which I can only guess is going to be a huge success. The first time I heard them I got 70s glam rock (which is one of my favorite genres) but it actually felt modern and this album was a huge surprise. It definitely feels a bit more pop, but still hearkens back to their glam rock sound and really that’s just the sound of The Struts. It would be easy to say they are a Queen ripoff, but the only way they can compare is by their willingness to experiment with different sounds.

Body Talks is the lead off and NOT the one with Ke$ha (don’t worry it’s a bonus track) and it just sets the mood for the rest of the album. I don’t particularly care for slower songs from bands like The Struts and there are a couple of what I would call downer tunes on here, but I was so down for them. Enough of that though I want to talk about my 2 favorite tracks that aren’t Fire and that won’t get nearly the amount of attention I think they deserve. Tatler Magazine and I Do It So Well tell a mini Hollywood story in the album, well to me anyway. The first is the part where the doe eyed midwesterner sets off to find fame in LaLa Land, its happy go lucky and makes you want to sway side to side. The latter is when little Norma Jean is strutting around like a boss and that’s what I would like to play when I walk to Target.

I saw Mid90s last weekend and got hit with a heavy dose of nostalgia. I didn’t skate in the Mid90s but rather started skating in ‘99 but the fashion of the era wasn’t that much different than what the characters in Mid90s were wearing. Not only that but the whole movie reminded me of seeing skate videos at the time and just really took me back to that culture as a whole.

Still, this isn’t about recommending Mid90s, you should see it but still that’s not what this is about, the point is the actors in the movie are actually really good skaters. The hero of the movie played by Na’Kel Smith is actually a professional skater for Adidias and Supreme, the protagonist of the movie the 13 year old Sunny Suljic is ALSO a professional skateboarder for Adidas. Ryan McLaughlin who plays “Fourth Grade” in the movie is a pro as is the golden haired, Olan Prenatt. All of these guys are skateboarders first, which I found pretty great and was a great factor in the movie feeling so good. I then heard Jonah Hill talk about how all these guys were introduced to him via Mikey Alfred who has a producer credit in the movie.

Mikey Alfred is the head of “Illegal Civilization”, a brand and skate team and film producing studio that creates all kind of ‘content’. It’s a perfect 21st century company in its breadth and ambition, also in it’s seeming sense of “beyond turning a profit” with a mission statement about being positive. All the kids in the movie are in the sphere of Illegal Civilization and are featured prominently in many of their videos. They’re really good skateboarders, seriously all of them. I hadn’t seen a skate video since about 2003, the only skate related thing I’d seen since was the Nike SB Paul Rodriguez “Today was a Good day” ad so jumping into the skate world of 2018 was at times shocking but also very familiar. It also felt cool to see how great these kids really are at skating, especially Sunny who is incredibly talented and tiny and how they’re doing it all over the world. I watched so many of their videos.

Illegal Civilization doesn’t just make Skate videos however, Mikey Alfred is also trying to become a filmmaker in a more conventional sense and uses the skaters and people associated to his “flow team" to star in short film projects such as “Summer of ‘17” which is a two part short film project that was released earlier in December of last year and February of this year with a 3rd part yet to be delivered. It’s a weird short film. The first part starts very slowly and kinda never reaches a simmer much less a boil but the second part is really great and would not have been as good if we hadn’t had the exposition provided in the first. More so than great story telling though “Summer of ‘17” serves as a look inside the Skating/suburban south California culture of the early 21st century with all of its incredible style as well as the underlying emotion of it all.(Think Mid90s in modern day, in terms of the setting only) To be completely honest I was entranced by the movie and while I started not caring about the people in it I was fully invested by the 2nd minute of the second part and am left yearning for the nonexistent 3rd part. Mikey Alfred has created something that’s aesthetically beautiful and captivating. The young actors deliver great performances and you find yourself hating then loving the characters from one second to the next. Seriously, watch both parts..watch the second even if the first didn’t fully convince you.

I hope to see much more of Mikey Alfred/Illegal Civilization in the future and I thank Jonah Hill for introducing me to them.