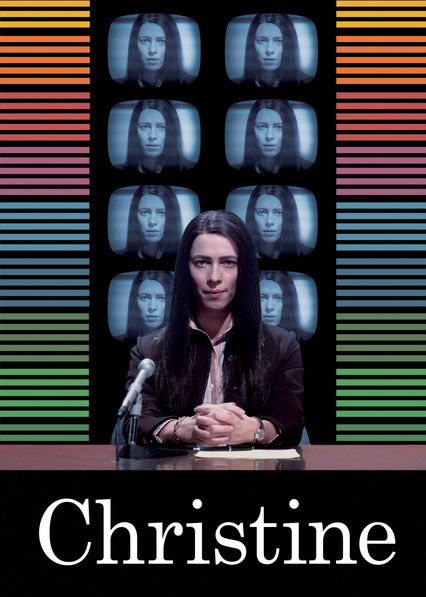 Christine on Netflix is a must watch. Not the Stephen King one, although that is one of my all time favorites. This 2016 film had been on my radar for awhile now, but got distracted by other things. I finally got around to watching it this week, and just do yourself the favor of checking it out.

The film is based on real events and stars Rebecca Hall as main character Christine Chubbuck. Chubbuck was a TV reporter in the 1970’s struggling with wanting to get ahead in her career without compromising what she loved to report. I didn't know the story behind Christine, and only had the vague Netflix description as to what I was about to watch. I think that is probably the best way to go into it. The end was really shocking, and had I looked up who she was, I would have ruined the film for myself. So, I will continue the vagueness on specifics, but trust me it is a must watch.

Rebecca Hall’s performance is the best I have seen from her. She’s also starred in The Town and The Awakening (also a recommend), but this is her best performance by far. She really gets the opportunity to play a character she hadn’t really portrayed before, and man oh man she knock it out of the park. It is truly a riveting and at times unbearably emotional performance. She successfully attempts to give a respectful-yet-honest portrait of the complex woman Christine Chubbuck was. Watch it, and tell me what you thought.

I’ll admit I don’t really listen to a lot of video game podcasts anymore because they also seemed too repetitive. I will also admit I’m partial to this one because it has my favorite writer, who’s baseball podcast has over a thousand episodes of which I have heard every one. Most of the other podcasts typically discuss news and new releases in the traditional open discussion podcast format, complete with geeking out. The good ones do it well, the imitators not so much. Soothing Lindberg voice familiarity aside, I really like Achievement Oriented. I have been listening for a while now and I think it does a good job to differentiate itself from the numerous other gaming podcasts out there in a few cool ways.

While Ben Lindberg and Jason Conception will also discuss trending topics in gaming they go a step further and have really interesting and related guests on all the time. They cover the gaming world through a lot of angles to and it’s just an insightful endeavor rather than news dump. Their interviews range from few a people covering and inside e-sports, voice actors to HBO and Netflix show runners. They constantly bring in their colleagues who game or “don’t game but played this one,” and have even got one to fall in love with the hobby again. This week instead of talking about any triple A titles they discussed the summer hit “Dream Daddy: A Dad Dating Simulator,” a steam game made by a 19-year-old. I can’t suggest one episode in particular but I go through their catalog and pick out a few topics you might be interested in. Better yet just subscribe and check them out it’s a really fun time.

The history of every NFL team | Chart Party

Jon Bois is a wonderful man. He creates so many weird and delightful video content centered around sports and I really recommend everything he does online, in fact go follow him on twitter right now.

calling all sports fans! let’s see how many of these sports terms you can name:

actually i don’t want to do this tweet anymore

This week however he released a brand new video in his "Chart Party" franchise a series of videos that is centered around charts and some abstract concept in sports. It's the quintessential "Why did I watch this?" type of video, and he says it himself. Here's the thing I love it though. It tickles this spot in me that has to do with liking data, liking making connections through data and sports. This particular video looks at each team in the NFL from 1987 to last season and ranks them by Win Volatity which is how much a team's win total changes from year to year. It's a good way to see the historically bad teams and the historically great teams and just the weird teams. It also kinda made me sad to be a Bengals fan but what doesn't? Watch it below!