It finally happened. Everyone has been waiting for Bayley and Sasha Banks to break up and it seemed like a long time coming especially since Bayley won the women’s title last year and we caught glimpses of underlying tension. We first see a fracture when Sasha eliminated Bayley in the first ever women’s Royal Rumble match. Then during the first ever women’s Elimination Chamber when she knocked her off the pod and at one point during the match Sasha says, “I’m better than you, Bayley”. 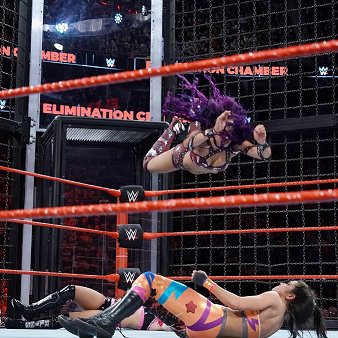 From then on we saw a down Bayley trailing her friend on Raw shows, but this week Sasha called out her passive aggressiveness and Bayley was ready to answer back. Bayley accuses her of taking advantage of her passiveness because she knows that if Sasha is in trouble she’ll come a runnin’. Sasha retorts that if Bayley actually took a page from the Legit Boss’s book people wouldn’t think she was such a loser. Naturally this leads to talk about who was the better title holder between the two and when Bayley asks how long the 4 time champ actually held the title for is when Sasha snaps and grabs that side ponytail of hers.

The most compelling aspect about this brawl is that both women (former friends?) show an aggressive side we haven’t really seen. I was expecting Bayley to stay on the ground once Sasha threw her into the lockers a second time and against a table, but no, that hugger’s killer instincts were activated. It took 3 people to pull them off one another, but any chance either of them could take to get another shot in, they took it. The two don’t have a singles match at Wrestlemania, but they’ll both compete in the women’s Battle Royale and I’m sure we’ll see more of this feud.

In case you haven’t been paying attention to my posts lately, Major League Baseball is back! I’m sorry to triple down on this ever increasingly niche sport but here we are.

More specifically for TWI this week I am letting you all know about the Statcast podcast. For those who may not know Statcast is, in short, MLB’s technology that uses radars and HD cameras to track everything that happens in a given game. It’s some pretty great technology that is changing the way we understand the game in remarkable ways but has also drawn some criticism given MLB’s handling of it’s data.

Regardless of data debates Statcast has lead to some great things, not the least of which is the statcast podcast. In the podcast Mike Petriello and Matt Myers bring us awesome new ways of looking at the game using numbers we literally can’t know without their access. I know what you’re thinking “I barely have time for anymore podcasts especially another baseball podcast I listen to so many already.” Well the best thing about this podcast is how unobtrusive it is. At first I only occasionally tuned in, but now I make sure to hit this one in my quest for podcast completionism every week. It only uploads once a week and it’s is rarely longer than 30 minutes long and at the end you will find yourself wanting more. This week the guys gave an interesting number for all 30 teams in their season preview so it was a little longer than normal but still just as awesome. These aren’t your grandpa or even your progressive WAR citing father’s stats, they discuss everything from how many times a hitter was shifted on to 4 seam fastball with two strikes usage. Check it out and expand your baseball knowledge.

This is not a new game at all but I recently acquired at a reduced price thanks to the nearest Toys R' Us closing down. Released last year around the same time as The Legend Of Zelda: Breath of the Wild this game was for the most part overlooked or set to live on backlogs while Zelda stole the limelight. The two games are very similar in alot of ways, open world adventuring, long haired bow wielding hero, open ended combat system, and an abundance of side quests to keep the player distracted for as long as they desire. Horizon Zero Dawn though has a setting that's unlike anything Zelda has ever had.

The World of Horizon Zero Dawn is one of the best environments in any game, ever. The environments are beautifully rendered, incredibly diverse, and littered with items to craft and enemies to fight. The enemies themselves are great looking robot animals or dinosaurs or hybrids each providing a unique challenge. The cities and characters of Horizon are also unlike any other game and all of these are presented with a breathtaking cinematic style.

Aside from the presentation the narrative of the game is one of the most unique in recent memory. It's a take on "post-apocalyptic" that also combines great aspects of ancient mysticism all told through a tale of discovery. This game has been a pleasant surprise in almost every way that a game can be.

I genuinely love everything about it.